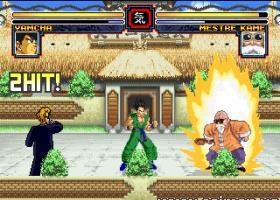 A great fighting game in the style of "DragonBall vs Streetfighter".
In "Dragon Ball Z MUGEN edition 2", you and/or a friend can transform yourself/s into one of 27 (4 hidden) characters and fight for victory! Several different play modes are sure to please everyone from the beginner to the expert.

The following keys are used to provide an offensive blow to the opponent which is usually kicking or hitting:
a, s, d, z, x, c, v